Left to right: Playmakers founder Coach Roz, Harrison Phillips of the Buffalo Bills, and Jordan Richards of the Oakland Raiders use football to teach kids about character. 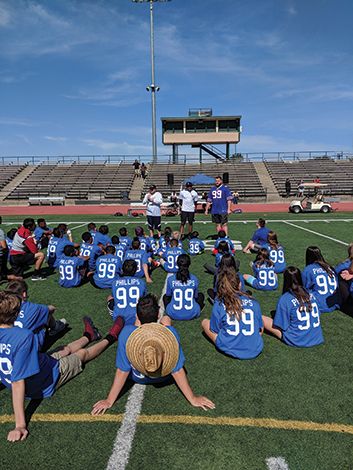 Joe Bodnar and Joe Simeone are long-time friends of Coach Roz, and they support the Playmakers mission by volunteering at the Character Academy Football Camps. Bodnar said, “It introduces the kids to the sport. It gives them a self-esteem boost; they get to be in the spotlight.”

Simeone explained, “The sport is the platform to talk about character. It provides an opportunity to ask kids, ‘What are you doing off the field? What are you doing in the classroom?’” The Playmakers’ programs focus on reaching at-risk and special needs kids, and Simeone said the kids often go on to become mentors to younger participants, taking on leadership roles in the program.

Playmakers board member Bill Hutto described why he got involved in the organization: “My heart is with at-risk youth, and Playmakers does a lot for these kids.” After retiring from a career in the California Department of Corrections, Hutto knows how important it is to provide at-risk kids with early intervention to keep them out of the prison system. “Giving them the opportunity to build their confidence and learn positive attitudes at a young age helps them become productive citizens,” said Hutto.

Harrison Phillips, NFL defensive tackle with the Buffalo Bills, helped host the football camp. “This is a really cool initiative,” said Phillips. “I’m happy to come out and unite a lot of different people through sports; it’s amazing the power of the sport to bring people together. It’s about teaching these kids character, team building, and working together — all the positive attributes of this sport that these kids might not get a chance to experience without this program.”

NFL player Jordan Richards played football at Folsom High School and college football at Stanford before playing with the New England Patriots, the Atlanta Falcons, and recently signing with the Oakland Raiders. Richards has been involved in Playmakers since he was 13, attending Playmakers football camps as a teen. “I didn’t know it at the time, but the lessons I learned here — who I am as I person, who I am as a man — I learned through the game. I’m so thankful for the time I had growing up with Coach Roz.”

Richards met Phillips at Stanford and recruited him to become a Playmakers sponsor. Richards said, “In a way, we grew up together — and we still encourage each other.” Richards spoke of the bonds of friendship created through football, explaining it as “the guys who helped build me, and I helped build them.”

Richards, Phillips, and numerous volunteers (including students from local high schools El Camino, Rio Americano, Western Sierra, and Mira Loma) ran a series of football drills with the Playmakers kids. Coach Roz is grateful to have the support of Richards and Phillips: “These guys contribute so much to the organization, not just financially, but by taking the time to show up.”

“The growth you get from this game really does last a lifetime,” said Richards. “Football taught me a lot about life, and a lot about myself. It takes a lot of people to make a team. It’s a family.” He urged the kids to take advantage of this opportunity: “Be a part of all this. It truly is special.” 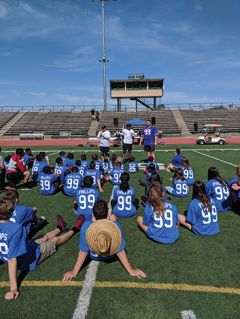 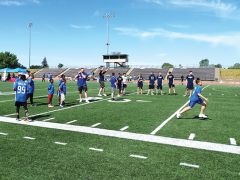